Reward for all the hard work

Axelent’s employees have worked extremely hard in 2018. Demand has skyrocketed and the inboxes have been overflowing with orders. The warehouse staff have been worked off their feet and the production machines have been running at full pelt. These are actually very thankful “concerns” considering we help to make industries, warehouses and constructions all over the world safe and secure. 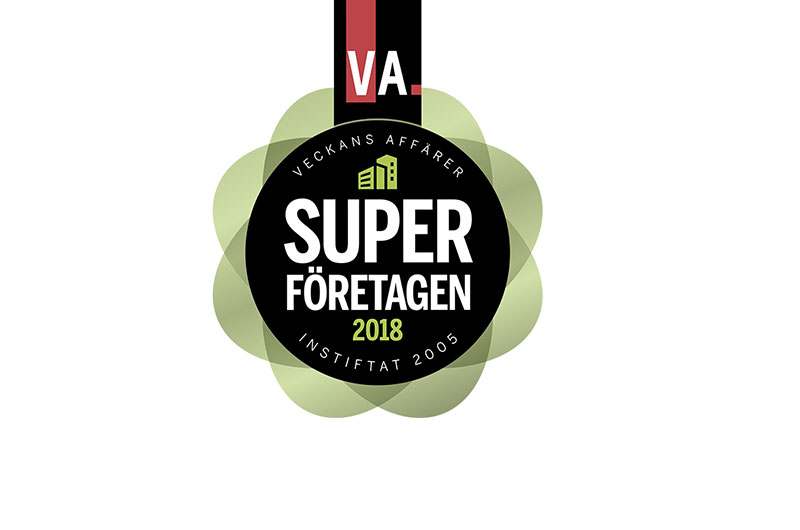 The pressure usually eases during the summer shutdown, but not this year. And it is still going full pelt as we approach Christmas. A thankful concern indeed, but we must also be aware of the enormous demands this puts on our staff, both here in Hillerstorp and in our subsidiaries the world over. We would therefore like to send a massive thank you to all our employees. Hard work pays off and we are now reaping the benefits, something you can read about further on. Well done everybody!

Honorary Award to Sweden’s Super Companies This autumn, Axelent won an award as one of Sweden's Super Companies. This means we perform better than 99.998% of all Swedish companies! Several demanding criteria must be met to win the award. The company has to show an increase in turnover and revenues while demonstrating stability and sustainability. The criteria must be met at least four years in a row to even make the nominee list. You can read more about how we became a Super Company below.

Nominated at the CMA gala

Our marketing team has been running a global campaign throughout 2018. The campaign, which we create together with the content agency Glory Days, consists, among other things, of our furry security agent Axel – which I hope has not passed anyone by unnoticed. Every year, the British Content Marketing Association organizes the gala Content Marketing Awards, where our campaign was nominated for Best Business to Business Campaign. Content Marketing Awards (CMA), held in London on November 27, are determined in a total of 92 categories and the jury consists of the top experts in content marketing worldwide. The competition prizes creative and exciting solutions like has proven effect and behind the competition is content Marketing Institute. Unfortunately, Axel did not receive a prize this time, but we send a big congratulation to Spoon, a Swedish content agency who won four bronze during the evening.

To achieve Super Company status you not only have to excel in one particular business area but also meet several other demanding criteria. A super company should have long-term sales growth and sustainable profitability, be strategically sound financially while being efficient in resource management.

Bisnode identifies and ranks Sweden’s Super Companies based on the financial performance of Swedish limited companies. The model takes into account a company's growth, profit, yield, efficiency, capital structure and financing over a four-year period. Of all the limited companies, only 728 made it to the 2018 top list.

Six parameters are used to assess the financial performance of each company, which is then is compared with reference values based on the performance of all other similar sized companies companies with similar business activities. The assessment is relative, so that the best companies can be identified regardless of economic upturn or downturn. Size is of no consequence either, the best performing companies are found among both large and small companies. The assessment is based on the latest four-year period for all companies that have existed since 2007. So the list includes companies that have not only shown better growth during a four-year period than other comparable companies, but also greater profit and yield, and better efficiency and capital structure than other comparable companies. On top of this, the companies also have to show sales of at least SEK 10 million in the past year.

The list is compiled by Per Weidenman, analyst at Bisnode, who has presented the Super Company of the Year for 14 years together with business magazine Veckans Affärer.

This year's newcomers include not only Axelent but other strong brands like Volvo Trucks and FLX TV (Felix Herngren’s production company).

Would you prefer to read X-News in PDF format?

Axelent Spain, S.A.U., is enjoying a very positive upward trend and has strengthened the team wit...

BMI Axelent is located in Saint Romain de Colbosc, a small town near Le Havre on the Normandy coa...

Just about every month, new Axelent records are set for the number of orders and panels produced....